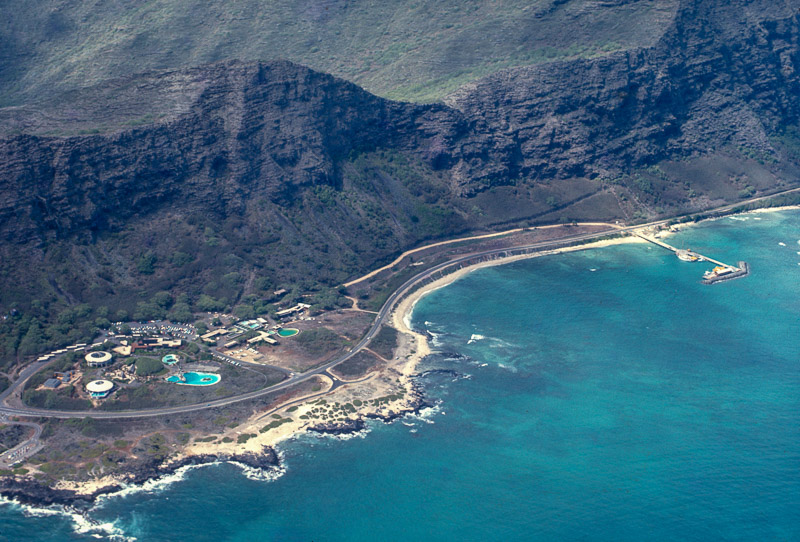 Early days at Sea Life Park: starting to communicate with the dolphins

Georges Gilbert, our dolphin collector, brought in a beautiful adult male spotted dolphin. He was handsomely marked, with whitish dots all over his black back, and blackish dots all over his pale gray lower half. His sickle-shaped elegant fins and tail were pitch black, and his beak and face were pitch black too, like a mask, highlighted by a bright white dot on the tip of his beak. An elegant animal. Georges named him Kahili, the word for the spotted feather-crowned posts carried long ago in honor of Hawaiian kings.

Kahili ate well and quickly became tame. Chris, one of our trainers, decided to teach Kahili to jump. He rigged a vertical pole onto the waist-high wall of the Kahili’s tank. A horizontal bar was attached to the pole, with a sliding device that could hold the bar out over the water at any level, from below the water surface to eight feet above ground.

Chris soon taught Kahili to swim over the bar, using a police-type whistle to say ‘that’s right’, followed by a fish. But if the bar was raised even just to the water surface, Kahili wouldn’t jump. Lure him with fish? No, he would not jump. Georges had told us that these spotted dolphins are prodigious jumpers in the ocean; they seem to do it just for fun. What’s wrong with Kahili?

I said if Chris didn’t mind, I’d take a try myself. Chris said “be my guest” and went back into the training office.

I greeted Kahili and gave him a fish. I lowered the bar to below the water surface, called Kahili by patting the water, and waved my hand. Kahili approached the bar and slithered awkwardly over it. I tooted the whistle when he was half over the bar, and tossed a fish to the far side of the tank. He went and got it.

I raised the bar about two inches over the water. Kahili swam toward the bar’s location and stopped. I threw him a free fish. He went and got it and came back, but then again he stopped. When the bar was above the water, apparently to Kahili it just disappeared.

So I thought about that for a minute. Often when I’ve been diving out on a coral reef somewhere I have marveled at the underside of the ocean surface. Underneath and looking up, you see a silver ceiling, beautiful and in motion all the time but not transparent. You cannot see through it from underwater. However, when I’ve been ready to scramble back into the divers’ skiff, if I look up from under water, I see the arms and faces of people leaning over, ready to help me in; and behind them, the blue sky.

The underside of the water is silver: but right overhead there’s a hole, about the size of a manhole cover, through which you can see everything above you. Maybe that’s Kahili’s problem. He doesn’t see the bar when it is above the silver roof.

I raised the bar to about two inches above the water. Kahili lined himself up alongside the tank wall and waited. I leaned over him, deliberately. Surprised, he cocked his head up; I captured that move with a tweet of the whistle and tossed his fish behind him. He went and got it. He came back, and again he looked up a little, and again I marked that excellent move, tossed a fish away from him, and waited for him to eat it and come back. And this time, he tilted his whole self upwards a bit more and OH, he saw the bar. He instantly jumped over it, cleanly, easily, with a comfortable foot or so to spare. I tossed three fish across the tank.

While he was cleaning up this bonus I raised the bar to 12 inches. He didn’t wait for advice, he swam into position and sailed over the bar. Whistle. Treat tossed behind him. While he ate that fish, I raised the bar to two feet. Yup, he knew what to do again. He dove a little, came up in the window that let him see the bar, and sailed over it. I think he was having fun, now that he’d figured it out.

Up to four feet. Up to six feet. Yup, no problem for this prodigious jumper. I ran the bar as high as it could go, eight feet.

Just then, Chris came into the training facility. I called to him.

At that instant Kahili took off again and sailed smoothly over the bar at the eight-foot measure. Chris scowled and retreated into the fish prep room, slamming the door behind him. The Mom in me smiled. Patience…

She initially learned about behavior theory as a pioneering dolphin trainer in the 1960s. But early on she had mentors from fields that rarely intersected, such as behaviorist B. F. Skinner and ethologist Konrad Lorenz. Karen has said: “I consider my gifts as a scientist to be the ability to synthesize apparently opposing fields of thought and to apply theory in the real world.”

In the real world, using her perspective, she has brought positive reinforcement (clicker) training to the dog and zoo worlds, gave confidence to hundreds of thousands of breast-feeding women, developed techniques for teaching people with autism, and has changed how surgeons learn their skills which in turn creates less stressful and more error-free operation rooms. The common thread through all of her work is how she effectively reduces gratuitous violence and creates a culture that is productive, yet filled with kindness.

Entering her tenth decade of life, Karen is retired and is enjoying living in the mountains of California with family.